What are you looking for?

on 29 janvier 2008 in Roadrunner Guitars Story 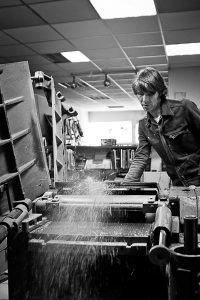 Laurent Hassoun became Mr Roadrunner Guitars in 1994 when he created his company in Nancy, France.

Laurent develops and makes custom guitars (solid body, archtop, lapsteel, ukeleles…), basses, resophonics, effects, amps, mikes and custom parts because he has a sound buzzing in his head which he wants to bring it out and share it around.

A true old-school artisan, a visit to Laurent’s workshop is like a step into a recent past or parallel universe where craftsmanship, creativity and passion for his noble calling mean you may find him enthusing about a new idea for sculpture, metal forging, pearl inlays, cool fuzz pedals made out of triangular ham tins – just about anything in fact that he can find and use to get that sound he can almost see in his head out into the “real” world. And make it look cool to boot.

History compels us to relate that in 1994 Laurent’s other identity as a touring musician lead him to develop his first Fuzz, the Supersonic.

Laurent had been playing guitar and bass for a few years with the “legendary” Squares who made several LPs for European and American labels (Hangman, Estrus, Royal Records…) in studios like Toe Rag and Red Studio.

While on tour in the UK, Laurent and his partner in garage rock crime, Nick Normal, found themselves bemoaning the lack of a really kicking fuzz pedal they could use to blow away the punters. When Laurent informed his chum that for his next trick he would make the very fuzz they wanted appear before their very eyes, Nick replied, with a Chamberlain-esque lack of historical vision, “I can’t see who that would interest except us”.

A quote is not available from Mr. Normal regarding the later appearance by Billy Gibbons of ZZ Top on live prime-time French TV with one of Laurent’s Supersonic Fuzz pedals which opened the way for important export success.

Laurent’s parallel career as a musician has always informed the guitars and effects he makes.

He began with the idea of producing 60s-style guitars like his Big Square and Shark models which he and the musicians he knew like Billy Childish wanted to play.

In 1996, he thought “why don’t I go and show this guitar to Bo Diddley ?” who was playing a festival nearby. Laurent left a couple of brochures in Bo’s dressing room and waited outside the door, lighting the blue touch paper and retreating to a safe distance as it were. Bo’s enthusiastic cry of “where is the m….f…. who made this guitar ?” rang out into the Lorraine night and Laurent had a new customer for his Big Square guitar.

Roadrunner was mostly making solidbody and thinline guitars from 1994 to 1999 and the success of the Supersonic Fuzz lead Laurent to bring out his kicking Dr Freeze tremolo and his Flexitone Q-Filter Wah-wah among other effects.

Around 2003, Laurent began to make his own parts for his guitars because he realized that certain of his designs were too specific for standard parts to work on them.

This has become an integral part of the Roadrunner credo – innovating to help muscians bring out the sound in their heads. Laurent uses Joe Bardem, Bare Knuckle and TV Jones mikes but has also developed mikes himself in collaboration with Benedetti, giving specifications and input on the mikes he then uses.

He is still an active musician and producer; currently playing and touring in Thundercrack, Boss Monkey, Rich Deluxe Remedial School Orchestra and has co-founded the Mighty Shots label where he works with just as much enthusiasm on arrangements and production.

This other side to Laurent’s life means he can really offer “custom” advice as well to help other musicians bring out the sound they know is somewhere just around a corner in their heads.

His aim is to use his craftsmanship, knowledge and experience to provide a full service to musicians, offering beautifully crafted instruments with fully hand-made parts, amps and mikes that fit together perfectly.

All Roadrunner Guitars’ products and parts are hand-made and thoroughly tested in house and Laurent insists upon only using highest quality parts and components for his creations. He would be letting himself down if he didn’t…

This website uses cookies to improve your experience while you navigate through the website. Out of these cookies, the cookies that are categorized as necessary are stored on your browser as they are essential for the working of basic functionalities of the website. We also use third-party cookies that help us analyze and understand how you use this website. These cookies will be stored in your browser only with your consent. You also have the option to opt-out of these cookies. But opting out of some of these cookies may have an effect on your browsing experience.
Necessary Toujours activé
Necessary cookies are absolutely essential for the website to function properly. This category only includes cookies that ensures basic functionalities and security features of the website. These cookies do not store any personal information.
Non-necessary
Any cookies that may not be particularly necessary for the website to function and is used specifically to collect user personal data via analytics, ads, other embedded contents are termed as non-necessary cookies. It is mandatory to procure user consent prior to running these cookies on your website.
Enregistrer & appliquer